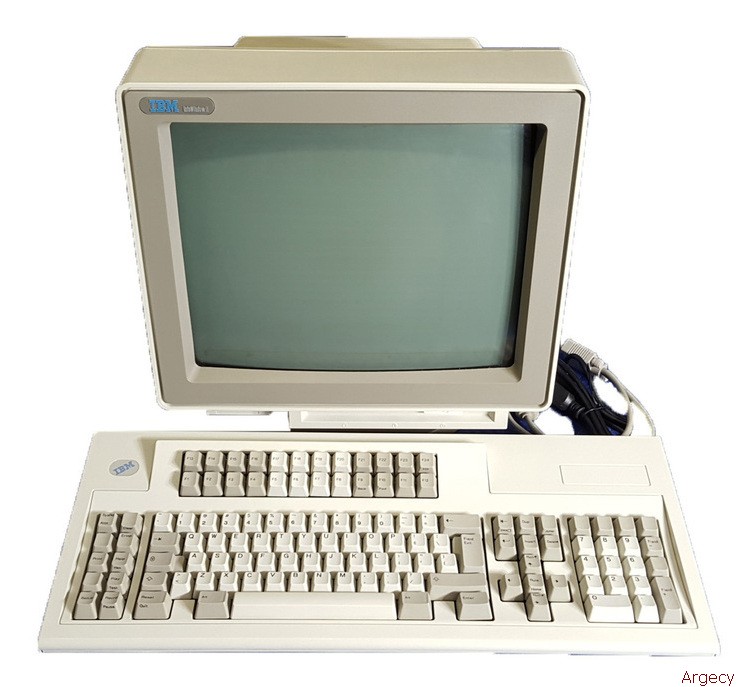 Model Abstract 3487-HGx
The 3487-HGx has a 15-in. Green display. The IBM 3487-HGx 15-inch monitor has an actual viewable screen size of 11.85 inches when measured diagonally.
Highlights New and enhanced functions for increased ease-of-use and productivity, and support of new capabilities provided by OS/400* Version 2 Release 2

The 3487 complies with emerging internationally recognized standards such as ISO (International Organization for Standardization) 9241 (part 3) and Swedish electromagnetic field recommendation (MPR-II). National language support is expanded to meet the latest requirements which include keyboards for Eastern Europe countries.

The 3487, together with IBM WindowTool/400 (5798-RYF), offers a low cost workstation window user interface, including support for the mouse.

The 3487 enhances the support of multisessions capability, allowing simultaneous support of two display sessions and one printer session (display-display-printer).

New display formats of 32 x 80, and 43 x 80 are available for use with advanced functions such as split screen. Split screen capability is also enhanced on the 3487. The user can divide the display screen into two variable size partitions, horizontally or vertically, to view different sessions. A new twin screen display mode of 49 x 80 is supported on the 3487 15-in. monochrome models, which allows two full 24 x 80 sessions, top-bottom, to be displayed simultaneously. The IBM 3487-HCx 15-inch monitor has an actual viewable screen size of 11.85 inches when measured diagonally.

The 3487 supports a calculator to perform local calculations, which operates in the OIA (operator information area) keeping the screen display totally viewable. The user can import data from an application to perform a calculation. The calculator allows storing and retrieving of numeric data, as well as frequently used mathematical expressions.

The 3487 has an etched screen, which minimizes glare and fingerprints. The 3487 utilizes a CRT with a high transmittance face plate. This CRT has the appearance of lightening the background. This technology has found wide acceptance among users in Europe. The use of a high transmittance face plate also tends to reduce reflections. Indicators displayed in symbols on the bottom row of the screen, outside the data area, provide useful operator information. Updating the screen from the host is accomplished without refresh interruption (i.e., no blinking). An underline type cursor and a rectangular reverse video cursor, with blinking option, are provided.

The cable-connected keyboard can be moved and the video element can be tilted and swiveled to change the screen angle for the operator. The keyboard slope can be adjusted by the user to 5 or 12 degrees.

A printer port is now supported on all models of the 3487, which provides host-addressable print as well as local screen copy. The type of printers has been expanded to include laser printers like IBM 4019/4029 or Hewlett-Packard LaserJet III**. Printer emulation is also enhanced to include 3812-SCS printer emulation, including COR (computer-oriented rotation) function, which allows print images to be shrunk automatically without changing the paper setting. The 3487 supports download of a printer definition table (PDT) to provide increased flexibility of the printer attachment. Users may be able to attach various ASCII printers by downloading a PDT from the AS/400 processor. With new AS/400 Workstation customization capability, customer can create the PDT, or keyboard table for keyboard remapping. AS/400 V2R2 is required for workstation customization.

The 3487 front-of-screen (FOS) characteristics meet or exceed the internationally recognized ISO 9241 (part 3). ISO 9241 (part 3) includes: a new character font on most models and screen formats, and reduced flicker using a 75-Hz refresh rate. The 3487 15-in. monochrome screen has a larger viewing area compared with the 3477 (16 percent larger than 15-in. monochrome, 47 percent larger than 14-in. monochrome), which meets ISO 9241 (part 3) in all of the model 2, 3, 4 and 5 screen formats. The 3487 meets or exceeds the Swedish recommendation (MPR-II) for magnetic fields (VLMF/ELMF), electric fields (VLEF/ELEF) as well as electro statics (ESF) to meet emerging workplace requirements.

The 3487 provides features to aid physically impaired persons, which include character attribute color selection for ease of character recognition by persons having problems with certain colors, adjustable typematic rate to control the rate at which characters are repeated using typematic action, adjustable vertical and horizontal mouse speed and double click interval, ability to change primary mouse button, and IBM KeyGuard accessory to prevent accidental striking of the wrong key or several keys simultaneously.

The 3487 supports a new advanced power management feature that turns off components not used during periods of inactivity. This power management feature reduces power consumption up to 65 percent and reduces component stress. A screen dimming feature blanks the application display area when the terminal is inactive. This reduces phosphor burn. These may result in extending the life of the display.

The 3487 provides a display adjustment capability through keyboard operation. Users can adjust the front-of-screen characteristics such as dot width, centering, viewing area, pincushioning and brightness, to compensate for display aging. (Monochrome display can adjust dot width only.)

The 3487 is plug compatible with 3477 InfoWindow displays to provide access to existing midrange host applications through the 5250 architecture.

The 3487 provides vital product data to the AS/400 system. This information (machine type, model and display address) is collected by the AS/400 system and is available to users and application programs via the display local hardware command (DSPLCLHDW).

The 3487 supports the expansion cartridge for possible future function enhancements or to meet the customer's unique requirements. The 3487 also supports character font download capability to support additional language in the future. An AS/400 processor with OS/400 Version 2 Release 2 or the 5494 remote control unit Release 1.1, is required for this capability.

IBM InfoWindow II 3487 Model HCx has a 14-in. Color video. The IBM 3487-HCx 14-inch monitor has an actual viewable screen size of 11.3 inches when measured diagonally.

Note: Keyboard and Stand are specified by feature code.

The 3487 and specify features are customer setup (CSU). CSU publications are in English or National Language.

The IBM 3487 attaches to the IBM System/36 and AS/400 machines or remotely to the IBM 5294, 5394, or 5494 Remote Control Unit via the IBM Cabling System, twinaxial cable, type 3 telephone twisted pair (TTP), or equivalent. When attached via the TTP, there can only be one display per port, and there needs to be a twinax to twisted pair adaptor (TTPA) at each end of the twisted pair cable unless a 5299 Model 3 Terminal Multiconnector is used.

To attach the IBM 3487 to the AS/400 machine, a twinaxial workstation controller is required for local attachment; for remote attachment, a 5294, 5394 or 5494 remote controller

The IBM 5294 is already withdrawn from marketing and no product support is available.

Screen characteristics - The 3487 displays provide a bright presentation of viewable area and picture elements for the following selectable screen formats:

The 3487 provide, via setup mode (for screen copy), the ability to select the area of the screen to be printed, as well as the print select quality, line density, and pitch.

The printer attachment cable (P/N 1525612) should be ordered with using Part Number 1525612. The printer cable is the same cable that would be used to attach the printer to the IBM Personal System/2*.

Keyboard features - Offer a choice of typewriter-style keyboards with the following features:

The following are not available:

The 3487 is shipped with a power cord as follows:

The IBM 3487 attaches directly to IBM System/36 and AS/400 processors, or indirectly via the IBM 5259 Migration Data Link or 5299 Terminal Multiconnector and twinaxial to telephone twisted pair adapter.

Programming support or feature prerequisites are:

Lift/Tilt/Swivel or Tilt/Swivel may be ordered by part number when ordered without a machine type.

** Company, product, or service name may be a trademark or service mark of others.
IBM Corporation 2003.