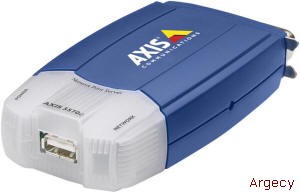 Print from IBM host systems via any port to any printer*

Axis' Host-to-LAN print servers includes all the extensive functionality of the professional print server family plus the ability to use virtually any printer with your IBM Mainframe or AS/400 system--without loading it with heavy conversion jobs.

Print from IBM host systems via any port to any printer

The AXIS 5570e, a host-to-LAN print server, enables organizations with IBM Mainframe (zSeries) or IBM AS/400 (iSeries) to print to any printer* or digital copier, including those with USB ports.

The AXIS 5570e, with built-in IBM protocol converters, is equipped with one USB and one parallel port, which enable printing to two printers simultaneously. The AXIS 5570e is the first multi-session USB print server for the IBM environment.

The AXIS 5570e provides support for all popular protocols and operating systems such as Windows, NetWare, Macintosh, UNIX and Linux, in addition to IBM host system printing over TCP/IP and SNA networks. The same printer can therefore be used for print jobs coming from the IBM host as well as Windows and other operating systems.

The AXIS 5570e is the successor to the successful AXIS 5470e, which is installed in tens of thousands of units worldwide. This model supports all the AXIS 5470e features and many more.

Q: What are the benefits of a host-to-LAN print server?
A: The host-to-LAN printers from Axis are developed according to the concept of distributed data conversion that delivers great scalability and helps free host system resources for more critical tasks, thus utilizing the IBM system more effectively and improving overall system throughput. You get the same functionality as from traditional IBM printers connected over coax or twinax, including features such as error recovery, exception notification, job control and end-of-job notification. There are no additional license fees.

Q: How do I install the print server in an IBM environment?
A: With the built-in installation wizard for IBM sessions, the installation is easily and quickly done (Autoconfig).

Q: Which operating systems does the print server support
A: In addition to the IBM Mainframe and IBM AS/400 support, AXIS 5570e and AXIS 5670e are multi-OS print servers with support for Windows, NetWare, Macintosh, UNIX and Linux.

Q: Will the AS/400 display all OS/400 messages?
A: Yes, the QSYSOPR message queue will display messages such as "Load Form Type xx".

Q: Will my printer report all printer errors to the AS/400?
A: Yes, the AXIS 5570e and AXIS 5670e report printer error messages such as "Paper End". If the print job ends before the printing is completed, it is possible to continue printing from a selected page.

Q: Does the print server support USB 2.0 printers?
A: Yes, printers following the USB 2.0 specification are backwards compatible with AXIS 5570e. This has been verified for common USB 2.0 printers.

Q: How fast is the USB communication?
A: The AXIS 5570e print server communicates according to the USB 1.1 standard, i.e. 12 Mbps.

Q: Can a parallel and a serial printer be connected at the same time?
A: Yes, AXIS 5670e is a multi-port print server that allows printing to two parallel printers and one serial printer simultaneously.

Q: Which printer drivers do I need to be able to print?
A: From the IBM Mainframe (zSeries) or IBM AS/400 (iSeries), no drivers are needed as the conversion is performed in the print server. From other environments, you only need standard drivers from the printer manufacturer.

Q: What type of security is used in the print server?
A: The print server administration pages are password protected. In addition to this, it is possible to increase the security with SSL/TLS for HTTPS security. The HTTPS standard is commonly used to secure communication over the Internet such as Internet banking and corporate intranets.

Q: Where can I buy this print server?
A: Axis Communications works with local resellers and system integrators worldwide.