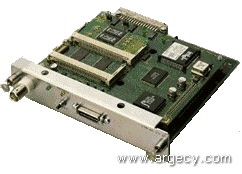 i-data 812-1x MIO is a high performance internal interface for HP LaserJet printers with MIO port. The i-data 812-1x MIO provides full support for all types of distributed printing from IBM mainframe or AS/400 systems in twinax networks.

Easy installation is provided by automatic configuration of key printer functions and local configuration via a Windows based set-up program. In addition, remote configuration, full printing status support and firmware download from IBM systems provide an efficient method of managing large and distributed printer installations at a minimal cost.

When installing an i-data 812-1x MIO interface all of the printer's basic functionality will be preserved. Simply add the ability of sharing the printer between the IBM AS/400 twinax and PC environment.