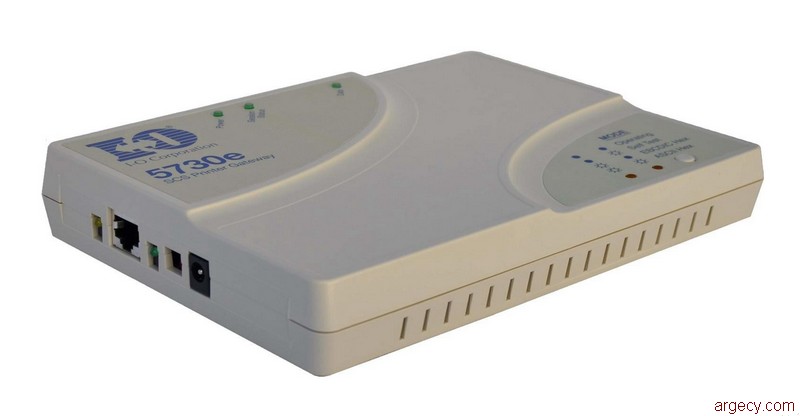 The I-O 5730e is a high speed Ethernet-in, Ethernet-out SCS gateway print server designed to convert native IBM SCS host print jobs to PCL, allowing them to be printed by a laser or dot matrix printer on an Ethernet Network. Supporting one printer, the 5730e delivers IBM SCS printing via TCP/IP, providing the control and printer feedback found in an IBM host environment.

Full Printing Control from IBM Host
The 5730e offers the same reliable, full-function IBM host printing and control print jobs are not lost in the black hole of LAN printing. The 5730e provides bi-directional communication between the printer and the IBM host, thus allowing error reporting and page-range printing.

Easy to Use
I-O's Configuration Utility software is included with every 5730e. Whether selecting TCP/IP or SNA, configuration is made easy through the use of a menu-based utility.

Features & Benefits
High Speed Printing, 100+ ppm: Data conversion is accomplished at the 5730e and sent to the printer via the Ethernet Network. The 5730e takes advantage of high- speed, high-performance printers without the bottleneck of a parallel port.

Supports one(1) Attached LAN Printer: One(1) laser or dot matrix printer can be configured as an SCS virtual printer.

Full IBM Control of Print Jobs: The 5730e provides a bi- directional communication between the host and the printer, via port 9100 and PJL commands.

Remote Printing:  The printers can be attached remotely or via a WAN or VPN network. Printer does not need to be next to the 5730e.

One Parallel Port: One laser or dot-matrix printer can be directly attached to the 5730e for IBM host or LAN print jobs.

I-O's Award Winning Printer Emulations: All SCS functions such as Duplex, Page Offset, COR, and Fonts are fully supported by the 5730e.