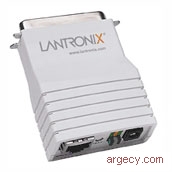 Quickly and easily share printers on a network with the LPS1-T and MPS100 print servers. Both models directly connect to the printer's parallel port, allowing laser, inkjet, and even dot matrix printers to be connected to Ethernet networks.

With an always-on-and-ready print server, there's no need to dedicate a computer to share a printer. Multiprotocol support means that PC, Mac, and Linux/Unix users can share a single printer, on the same network. Protocol support includes NetBIOS/NETBEUI, LPR for Windows and Linux/Unix systems, IPX for Novell NetWare, AppleTalk/EtherTalk for Mac OS, and LAT for DEC equipment.

Use the included EZWebCon software for quick and easy initial setup. Once installed, the print server can be reconfigured or managed from any computer with a web browser. A command line interface is available via Telnet as an alternative method to configure the unit.

The LPS1-T and MPS100 are ideal for both small workgroups and large enterprises, providing seamless network printing for all major network protocols and operating systems.