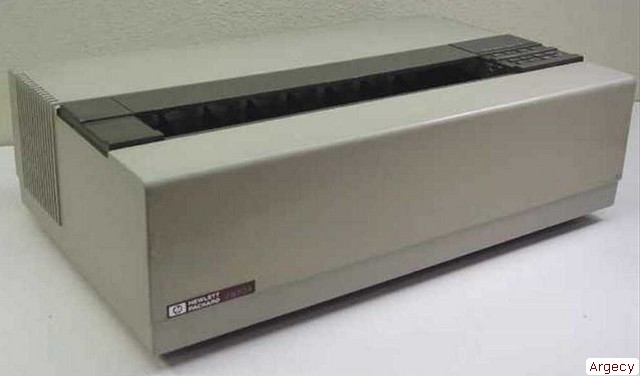 This document provides basic information on printer setup and use for the HP 2932A, 2933A, and 2934A printers (called 293X for short) which are HP's 12-pin dot matrix impact printers introduced in October 1983. The primary hosts were HP mainframes and terminals. On October 31, 1993, the HP 2934A, the last of the 293X printers, became the final printer in this series to be discontinued. The support life for the 293X printers ended November 1, 1998. This means that HP will no longer repair these printers and does not have spare parts available.

This document contains important product information about the HP 2932a Dot Matrix printer.


Several issues need to be considered when connecting HP 2932A, 2933A, and 2934A printers to an IBM PC or compatible:

Accessing printer settings
To access the Printer Settings or Interface Settings when the printer is online:

Serial printer settings
Verifying Serial connection
To verify Serial connection between an HP 2932A, 2933A, or 2934A printer and a PC you need:
DOS Mode commands
Two DOS-Mode commands are necessary to have the PC recognize the Serial or COM: port. The commands are typed at the DOS prompt.
Centronics parallel cabling
"PigTail" cable
Verifying parallel connection
Printing to the Centronics parallel port (LPT1:) requires correct cabling--both the short interface ("pig tail"] cable and the standard Centronics cable must be attached to the printer and PC. The Centronics interface (LPT1:) is the default printer interface in the DOS environment. No Mode commands are necessary to redirect output to the LPT1: port.
Other input and output jacks
If you have another printer interface, like HP-IB, and want to change it to the Centronics or Serial interface, you will need to send your printer in for servicing. HP no longer services or repairs these printers.
Supplies and accessories
These part numbers are for informational purposes only. Except for the Owner's manual, HP no longer supplies these parts.